He Just Doesn’t Get It

Dick sent a letter into my hometown paper, the Altoona Mirror:

My question is why? We’re all in same conference. Is it because Ohio State beats PSU 75 percent of the time?

You never read stories of Penn State fans coming to Columbus and being abused, verbally and physically, so I just do not get it.

I have friends from Lewisburg who come to Columbus to the game and remark that they’ve never been treated better. I’ve read comments from other schools’ fans who say they will never return to Beaver Stadium again because of the rude, crude fans, not to mention incidents of visiting bands being tormented.
I’m not defending Jim Tressel because I’ve never been a fan of his, but to kick your heels and gloat and be so happy because of someone else’s troubles, I don’t get it.

My question is WHY?

Why does this man care what the “Pennsylvania people” think?  He lives in Troy, Ohio and also has a home in California.  He grew up in Lewisburg, yet finds it necessary to write in to Pennsylvania sports venues like the Altoona Mirror and PennLive with his derogatory accusations . . .rude, crude fans that throw piss on other bands.  It really does start to get old.  And now it bothers him that some of us are gloating about Ohio State’s troubles?  Methinks the man is obsessed, although I have been obsessed ever since his complaints got me fired by PennLive.  But I have a reason . . . 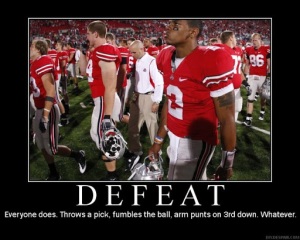 What does he possibly gain by writing these letters to newspapers in the heart of Penn State country?  What does he expect?  We’re going to read his pearls of wisdom and change our ways?  I have never gone on some other teams messageboard and flamed the fanbase.  The only opposing fan I have ever dealt harshly with is Mr Buckeye himself, and he couldn’t handle the truth.  He went crying to the higher-ups and demanded my head on a platter.  If you don’t want to hear the answer to the question, don’t ask it in the first place.

Not everyone is gloating over Ohio State’s situation.  My fellow blogger Carolyn Todd wishes nothing but the best for the Scarlet and Gray.

In answering his own befuddled question, he muses that we are all in the same conference.  Has anyone read Stephen King’s Under the Dome . . .‘Just a small town, baby, and we all support the team.’  If you haven’t read the book, the implication is lost here.

What does O$U being in the Big Ten have to do with what’s happening?  Is it good for the conference that Ohio State cheats?  Would it be better for our conference if they were allowed to cheat and we all look the other way?  How is this even pertinent to the issue at hand?

And I don’t think it’s because of Ohio State winning 75% of the time.  Apparently, Senor Faust is reely bad at the mathematology.  According to my records, the series stands at 12-14 against the Buckeyes.  14 out of 26 is about 54% if you round up.  Nowhere close to 75%.  And how many of those wins would you have had if you hadn’t cheated to get recruits???!!!  Tainted wins each and every one.

As to the fan treatment part, I am not naive enough to think nothing bad ever happens at Penn State.  But not all fans share this view.  Here is an Iowa fan concluding Beaver Stadium is a “nice place to be.”  But I am sure you can find others that are not ringing endorsements of the Penn State experience.

All the same, I’m surprised that Dick is so positive that no Penn State fans have ever had a bad experience at The Shoe.  In a review of experiences at Ohio Stadium, here are some comments:

[Texas] One item that should be mentioned at the outset — Ohio State has the absolute worst fans in the entire country. Terms like obnoxious and sophomoric cannot provide justice as descriptions for these overly aggressive individuals.
[THEM] it wasn’t the loss that made me sick, but the way osu fans treated our team and the fans. spitting on our players? booing our band? punching player’s moms as they walked past? really?

[Illinois] A friend from OSU got me the ticket. I wore my Illinois gear, as any good fan should. I wasn’t being annoying, but I was clearly getting extremely excited as our team marched to victory over the “mighty” buckeyes.The crowd (which, around me, consisted mostly of locals, not students) literally threatened my life on multiple occasions.

I expected to get heckled (frankly, I’d be disappointed if I wasn’t), but the physical threats were unnecessary. Three people literally surrounded me and told me if I clapped one more time that they would “beat the shit out of me.”

The great Ohio Stadium, home to a bunch of sore losers.

I could go on, but you get the point.  Every fanbase has their unsavory characters.  Your proximity to these people at any given game will color your perception about that stadium and fan base.

But in Dick’s mind, Ohio State fans are all angels, and we Pennsylvanian’s are just classeless rubes that love to see their program collapse.  The world is not only scarlet & gray, but apparently black and white.  All or none.  His way or the highway.

And that is why he will never get it.

I just wish he’d keep his trash in Ohio.