Normally, I wouldn’t even mention something like this, but apparently Eleven Warriors (or is that Eleven Worriers?) linked a picture I farked likening Jim Tressel to Richard Nixon.  This was in the context of a post praying suggesting that Penn State leave the Big Ten.  Along with Iowa.  That makes me feel better.

When I fantasized about casting Penn State’s gutter-dwelling, cowardly fanbase out of the Big Ten, the only time I thought the Federal Justice Department would be involved included necrophilia charges centering on some sick abuse of Joe Paterno’s corpse. (RIP Joe Paterno, who tragically was eaten alive by a pack of wild wasps in 2009.)

Sadly, the Federalés are now sniffing around an alleged cover-up of the Jerry Sandusky incident. I’m sure Penn State’s fans/lawyers would argue something like “AW SHUCKS, it’s just mere string of unfortunate coincidences over the course of nearly 15 years.” I hope the judge shits on them when they do.

The Big Ten should not be associated with anything that is going to come out of this federal investigation into Penn State. Federal prosecutors, especially the one looking into Penn State, aren’t known for games. So just know if Penn State catches a case, it’s curtains for them.

If Penn State had any dignity, they would have forfeited the rest of their 2011 season. They didn’t. In fact, they hired another football coach and plan on fielding a team in 2012. I hope it doesn’t take a Federal incitement to prove how disgusting this is.

All Penn State players should be given their immediate and unconditional scholarship release and a stuffed Nittany Lion head should be mounted on the wall as a lesson to the next group of people who think “the brand” is more important than systematic child molestation. Trust me, Delaney, you won’t regret this one.

Yes indeed.  Every single person in Pennsylvania–and especially the football fans of Penn State–feel that the Penn State name is more important than child molestation.  We should just dismantle Beaver Stadium, sell the scrap iron, and donate the money to rape victims.  The problem will be solved and no more kids will ever be molested again.

Seriously?  So if you’re girlfriend asks you to kill someone to prove that you love her, it’s okay to do it?  Doing something wrong for a good reason doesn’t make it good.  It’s still wrong.  Blaming–and more importantly punishing the current team–does nothing to rectify the wrongs allegedly committed and doesn’t provide one iota of relief to any victim that has suffered.  How can rational human beings have such convoluted thinking?  Oh wait!  It’s a Buckeye site.  I answered my own question.

Which brings me to the reason I actually started this post . . . 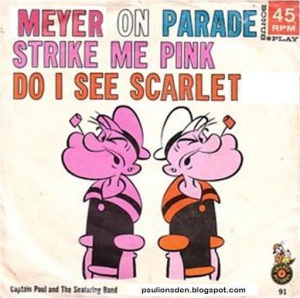 Apparently Pope Urban has pissed some people off already.

Ohio State football coach Urban Meyer sent a letter of apology to a campus lesbian and gay advocacy group for a team rule that punished “loafing” players by making them wear lavender jerseys during practice.

Responding to the Scarlet and Gay complaint, Meyer said players pulling up short for the second time during drills would be made to wear another color other than the “purple” jerseys.

“The use of purple was never intended to be used to offend anyone, but since it has, we have taken steps to change the color,” Meyer wrote in his return letter March 1. “Please accept our sincere apologies.”

Meyer added, “We have core values of respect and honor within our program, and these are two principles that are central to my personal life, my coaching and to Ohio State and its athletics programs. Bias has absolutely no role in how we think or operate.”

There’s a Scarlet and Gay president?  I guess there’s nothing wrong with that on multiple levels.  Is Northwestern pissed because he called the lavender jerseys purple?  Does Iowa still have the pink visitor’s locker room?  Does anyone care?  Oh wait.  They want to throw Iowa out of the conference too!!!!