The more things change, the more they seem to stay the same.  I saw several pundits predicting a close game between PSU and UCF–even going so far as to say the difference could come down to a field goal.  Freaking psychics!

My first thought–God I hope it doesn’t come down to a Sam Ficken field goal.

I know it was James Franklin on the sideline, but seeing what happened on the field–a clearly better team missing and wasting opportunities, letting an under-matched opponent hang around to take advantage of mistakes and penalties, and then depending on a last second field goal to pull out a win in a game that you led for all but 1:13 on the clock–made me think JOE PATERNO.  Somewhere, he is smiling at the old school outcome of this Croke Park Classic.

I know it gets old–Penn State fans bitching about the refs and bad calls, but for the love of God, can you stop giving us so much fodder to chew on????  And the worst part?  This wasn’t even a crew of inept Big Ten refs.  Offensive PI?  Give me a break.  You know it’s bad when even the inept and anti-PSU biased announcers don’t think there was a penalty.  Granted, the roughing the kicker penalty was probably a gift for PSU, but YOU KNOW that call goes either way, and I personally think it was a make-up call for the unsportsmanlike conduct on the kick-off.  Yeah, mouthing off after your helmet was torn off was definitely in poor taste and a bad decision, but a 15-yarder?  How about a warning, officer?

James Franklin’s debut was not illustrious or overly impressive, but we must temper our criticism against the back-drop.  It was the first game of the season.  Mistakes will be made.  He seemed to mismanage the time clock at the ends of both halves, but the final result was still a win.  And while the gaffe at the end of the first half didn’t cost us any points, you would like to believe that had we been playing Ohio State or Michigan State, that he would have chosen to punt.  But given that UCF was offensively inept (at that point), and he had a chance to put some more points on the board, I don’t know that his decision was actually a bad one.  Could have been.  Wasn’t in the final analysis.

None of Franklin’s bad choices were as bad as O’Leary’s decision to start de novo with DiNovo at quarterback.  Thank God for that!  It was a tale of two different halves, as Holman came in and almost stole this game away from Christian Hackenberg.

Speaking of Hack, he notched a new PSU record with 454 yards, going 32 for 47 on the day.  Part of this was due to the lack of a running game.  But defense was supposed to be a strength of this UCF team, with most of the D back from last year and almost the entire secondary intact.  Our offensive line looked shaky in the early going, but seemed to get better as the game progressed.  Hack was a little gimpy late in the game, and hopefully those are just minor growing pains.

We seemed to have some trouble maintaining footing.  I blame this on Spider retiring.  Not sure who replaced him, but that dude has some work cut out for him.

The Lions won the Dan Rooney Trophy . . . a new piece of hardware to add to our collection, and much nicer than the hideous Land Grant Monstrosity that will up for grabs at the end of the season. 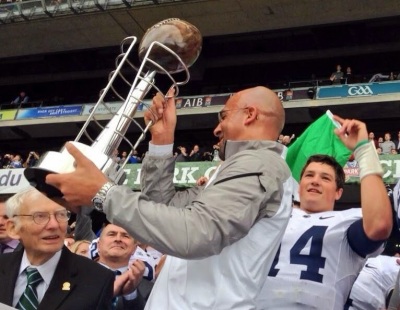 Thank you Dublin for allowing us to desecrate your hallowed “football” sod with our American form of soccer.  I liked the use of pitchforks to replace our divots.

Although they sported the away game white unis, the BLUE and WHITE prevailed in a 26-24 thriller that was much closer than it should have been.  Penn State really dominated the first half, but had only a 7 point lead to show for it.  Poor refereeing, players tripping on divots, and turnovers seemed to keep the knights in the game.  Holman sparked their offense in the second half, and that may also hint to the lack of depth we have due to sanctions.  This game could have been a disaster had we played in the heat and humidity of Orlando.

James Franklin sported a blue ball cap on and off, early in the game.  I’ve never seen a picture of him wearing a hat on the sidelines, but come November, he may need that.

I have to admit I teared up when he kicked that final field goal.  Way to go, Sam!

As you can see, PSU clearly dominated the stats, more than doubling the total yardage of the Knights, winning time of possession by 9 minutes, and better third down conversion percentages.  What kept the Knights in the game was the 9 points off turnovers, and the two INTs.  Both teams exchanged fumbles.

Rutgers came from behind to defeat Washington State 41-38.

THEM managed to win and avoid pulling a second Appalachian State, defeating the Mountaineers 52-14.  So take that!

The Buckeyes were down to the midshipmen 7-6 at the half, but managed to pull away with a 34-17 win.

The Maryland Twerps dominated James Madison (and a couple of other old presidents) 52-7.

Meanwhile the Cornhuskers stormed the beaches of Florida Atlantic 55-7.

Wisconsin, not wanting Northwestern to be the only loser, fell apart against LSU, losing 28-24 after a 17 point rally by the Tigers.

1.  South Carolina–#9 taken to the woodshed by the Texas Aggies, even without Johnny Football.

2.  Delaware–lost to Pitt 62-0.  Maybe Pitt can schedule Rhode Island and Alaska too!

The Akron Zips come to Beaver Stadium next week for a NOON kick-off.  The Zips pasted Howard 41-0 this past weekend.

The Lions opened around an 18 point favorite but that line has already dropped a few points depending on which betting service you look at, but I imagine will stay somewhere just north of a two score margin.

The Zips were ranked preseason by USA Today at #94.

Did you know that Terry Bowden is their coach?  I did not know that!  Unfortunately for him, he ain’t in Auburn anymore.

This should be another good day for Hack, and perhaps a chance for his back-up to get some reps.